Aang is the main protagonist of the Avatar: The Last Airbender series. He appeared in the 112th episode of DEATH BATTLE!, Aang VS Edward Elric, where he fought against Edward Elric from the Fullmetal Alchemist series.

Aang was born as the child of two Air Nomads, but when he selected four specific relics out of thousands of toys, it was confirmed that he was the next Avatar, a master of all four elements. He was taken in and trained in the art of airbending by the monks of the Southern Air Temple, and at the age of twelve, he became the youngest airbending master in Air Nomad history and earned himself his airbending tattoos.

Because of signs of a future war, Aang was told that he was the Avatar prematurely so that he would be better prepared for it. However, not much later, Aang discovered that he would have to leave his home to complete his training, so he left with his sky bison Appa and got caught in a storm. To save himself, Aang entered the Avatar State and froze himself for one hundred years, during which time the Fire Nation waged war and wiped out the Air Nomads.

One hundred years after the Air Nomad Genocide, the frozen Aang wound up at the South Pole and was freed by siblings Sokka and Katara of the Southern Water Tribe. Together as Team Avatar, they traveled all over the world to teach Aang water-, earth- and lastly firebending to eventually defeat the Fire Lord and end the war once and for all. 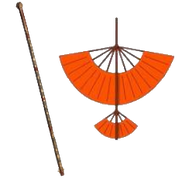 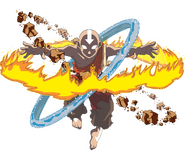 Avatar State
Add a photo to this gallery

Retrieved from "https://deathbattle.fandom.com/wiki/Aang?oldid=1073816"
Community content is available under CC-BY-SA unless otherwise noted.