When Afro was young, his father was challenged and killed in front of Afro by a man named Justice, who was trying to obtain the Number One Headband, which was said to give its owner god-like powers and immortality to anything but the owner of the Number Two Headband. While trying to get the Number Two Headband in an attempt to get revenge, Afro was taken in and trained by a Sword Master, who turned out to be the owner of it and eventually killed by Afro during an attack on both of them.

As the new Number Two, Afro has to face many foes who are trying to take his headband, while still being on his quest of vengeance against Justice. 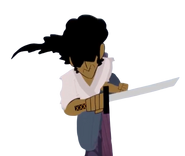 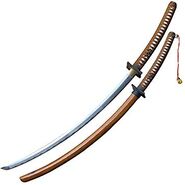 The Number One Headband

Joint Style Cigarette
Add a photo to this gallery

Retrieved from "https://deathbattle.fandom.com/wiki/Afro_Samurai?oldid=1072761"
Community content is available under CC-BY-SA unless otherwise noted.