Agent Carolina is one of the main protagonists of the Red vs. Blue series. She appeared in the 64th episode Meta VS Carolina, where she fought against fellow former Freelancer The Meta.

The daughter of Dr. Leonard Church and UNSC marine Allison Church, Carolina joined Project Freelancer and became the top ranked agent of the organization. However, Agent Tex showed up, causing Carolina to become more competitive and focused on beating Tex (unaware that she was in fact the Beta A.I., based on her deceased mother). During Tex's failed attempt to free the Alpha A.I., Carolina was the first victim in The Meta's hunt to capture all of the A.I. fragments, losing Eta and Iota, and being tossed off a cliff.

Carolina makes a small cameo alongside The Meta during Deadpool VS Pinkie Pie, after Deadpool and Pinkie Pie entered YouTube, as both of them can be seen in the thumbnail for their episode.

Note: Epsilon's quotes will be highlighted in Bold

Carolina's face without her helmet on 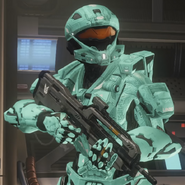 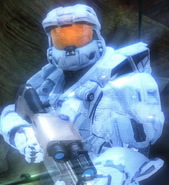 Epsilon, Carolina's A.I. partner
Add a photo to this gallery

Retrieved from "https://deathbattle.fandom.com/wiki/Agent_Carolina?oldid=1082173"
Community content is available under CC-BY-SA unless otherwise noted.