Toshinori Yagi, AKA All Might, is one of the main protagonists of the My Hero Academia series. He appeared in the 119th episode and Season 6 Finale of DEATH BATTLE!, All Might VS Might Guy, where he fought against Might Guy from the Naruto series.

Toshinori Yagi was born Quirkless during a time in the world where evil ran rampant. During his teenage years, Toshinori met a legendary hero named Nana Shimura. He told Nana that he wanted to create a world where everyone can smile and live happily together and that he needed to become a "Symbol of Peace" to inspire a new age of harmony. Nana passed One For All down to Toshinori, making him the eighth torchbearer of the great power. With that incredible power comes the danger of facing All For One. Eventually, All For One tracked them down and attacked. Nana sacrificed herself to ensure Toshinor's safety.

Thanks to training from Nana's close friend Gran Torino and his attendance at U.A. High School, Tosinori was able to improve control over his quirk. However, he was distraught after the death of his master and was unable to train to his potential. Gran Torino ordered Toshinori to train in the United States after he graduated so All For One could not reach him. Before he departed to the U.S., Toshinori reminded himself of his master's trademark smile. He shaped his hair and donned what would become his own signature smile for the first time as All Might.

All Might's head can be seen as a statue in the background in Goro's trophy room during Goro VS Machamp.

All Might made a cameo appearance during the Season 4 Finale of One Minute Melee, Gon VS Midoriya, where he could be seen stopping Hisoka's attempts of threatening Deku before Round 1 started and coming to his help after Round 3.

All Might's cameo in Goro VS Machamp 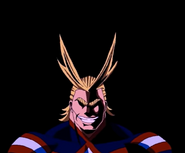 Appearance in One Minute Melee

United States of Smash
Add a photo to this gallery

Retrieved from "https://deathbattle.fandom.com/wiki/All_Might?oldid=1056567"
Community content is available under CC-BY-SA unless otherwise noted.