Lazuli, AKA Android 18, is a protagonist from the Dragon Ball series. She appeared in the 78th episode of DEATH BATTLE!, Android 18 VS Captain Marvel, where she fought against Captain Marvel from Marvel Comics.

Originally named Lazuli, Android 18 was kidnapped by Dr. Gero and turned into a cybernetic android as part of his revenge plan against Son Goku. When she and her brother Android 17 were activated, they turned on Gero and left to kill Goku off on their own with Android 16 (another one of Gero's creations).

However, after being around Earth's landscape and scenery, she changed her tone of destroying the planet and killing Goku. She would soon marry Krillin and became one of the top female fighters in the Z-Fighters. 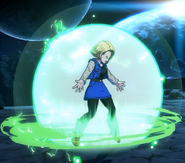 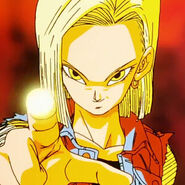 18 Unleashing Infinite Bullets
Add a photo to this gallery

Retrieved from "https://deathbattle.fandom.com/wiki/Android_18?oldid=1074146"
Community content is available under CC-BY-SA unless otherwise noted.