This article is about Bruce Wayne. For the other hero named Batman, see Batman Beyond

Bruce Wayne was the son of billionaire couple Thomas and Martha Wayne, and was forever changed after his parents were killed in an alleyway right in front of his eyes. After this traumatizing experience, he dedicated his life to wage war on the criminal empire, and spent the next decade physically and mentally improving himself to peak human perfection. Determined to strike fear into the hearts of criminals, he is inspired by a bat flying into the window and becomes the vigilante known as Batman, the defender of Gotham City.

Batman's fight with Captain America was briefly seen in Chuck Norris VS Segata Sanshiro when the two martial artists clashed.

Batman's fight with Captain America was also featured in Deadpool VS Pinkie Pie, where Deadpool disguised himself as Batman to confuse Captain America. Both Batman and Captain America can also be seen in the thumbnail for their episode, when the two 4th Wall breakers enter YouTube.

Batman made a cameo in the ending of Venom VS Bane where he comes across his enemy's corpse and is disgusted by the sight.

Batman Beyond VS Spider-Man 2099

Batman made a cameo in Winter Soldier VS Red Hood, where he contacts Jason that eight assassins from the League of Shadows were gunned down by a modified M-4 at his current location. He assumes and questions him if he was responsible before being hanged up. A picture of Bruce Wayne also appears in the background.

Batman appeared in Season 1 of One Minute Melee, where he fought against Albert Wesker from the Resident Evil series and lost.

He later reappeared in Season 4, where he fought Iron Man from Marvel Comics and won.

Batman appeared in Season 3 of DBX, where he fought against Scorpion from the Mortal Kombat series and lost.

He later reappeared in the Season 4 Finale, where he fought against Iron Man from Marvel Comics and lost. The alternate ending, in which Batman wins, was released for public viewing on Batman Day.

The Adam West, Michael Keaton, Christian Bale, and Arkham versions of Batman appeared in the series premiere of Death Race, where they all raced against one another in their respective Batmobiles.

Christian Bale's Batman was eliminated first after accidentally sending the Tumbler off the track and was burned to death on his motorcycle by Keaton. Arkham Batman was blown up by a Bat Nuke from the 60s Caped Crusaders. The Adam West Batman and his Batmobile ended up as the winner after Keaton launches them to the finish line with a grenade (though the Michael Keaton Batman was the only one to survive). Adam West Batman was voiced by Kamran Nikhad.

Sprite used in DEATH BATTLE!, One Minute Melee and Season 3 of DBX

Sprite used in Season 4 of DBX 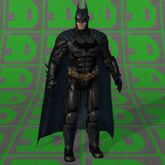 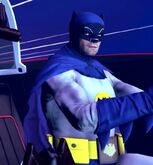 Bat Cowl
Add a photo to this gallery

Retrieved from "https://deathbattle.fandom.com/wiki/Batman?oldid=1097591"
Community content is available under CC-BY-SA unless otherwise noted.