The Blue Genius of the X-Men

Henry "Hank" McCoy, AKA Beast, is a superhero from Marvel Comics. He appeared in the 47th episode of DEATH BATTLE!, Beast VS Goliath, where he fought against Goliath from the Gargoyles series.

Henry "Hank" McCoy was born with giant hands and feet as a result of the mutant gene, but kept it a secret by studying many doctorates, and excelling at sports. Once it was revealed he was a mutant, Hank was shunned by everyone - including his friends and family. Eventually he was recruited by Professor Xavier and joined the X-Men as one of its founding members codenamed Beast.

He briefly left the team to study a way to rid himself of the mutagen gene, but unfortunately while testing it, it did the opposite of what it was meant to do. This caused him to become a blue-furred beast, and decided to fight again with the X-Men.

During Deadpool VS Pinkie Pie, a poster of the comic cover of "X-Men #100" featuring Beast can be seen in the background on the set of DEATH BATTLE! Cast during Deadpool's invasion of the show. 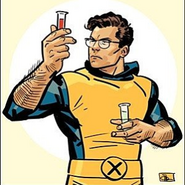 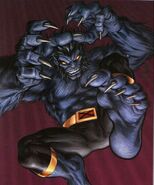