Beerus is a protagonist from the Dragon Ball series. He appeared in the 130th episode of DEATH BATTLE!, Beerus VS Sailor Galaxia, where he fought against Sailor Galaxia from the Sailor Moon series.

Beerus is the God of Destruction of Universe 7 tasked with maintaining balance in the universe and is feared by many. He slumbers for several years to several decades straight, and destroys planets in his administrative zone during the few years when he is awake as he is accompanied by his martial arts trainer and Guide Angel, Whis.

Eventually, Beerus has a prophetic dream where he meets a "Super Saiyan God". After learning that Frieza failed to eradicate all of the Saiyans, Beerus travels to Earth and threatens to destroy the planet if he does not face a Super Saiyan God. Thanks to a ritual, Goku is able to transform into a Super Saiyan God and faces off against the God of Destruction. Goku ultimately loses the fight, but Beerus decides to spare Earth as he senses the Saiyan's untapped potential and has grown quite fond of the planet's cuisine. 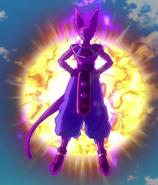 Wrath of the God of Destruction

Energy Nullification
Add a photo to this gallery

Retrieved from "https://deathbattle.fandom.com/wiki/Beerus?oldid=1120586"
Community content is available under CC-BY-SA unless otherwise noted.