Dinah Laurel Lance, AKA Black Canary, is a superheroine from DC Comics. She appeared in the 121st episode of DEATH BATTLE!, Black Canary VS Sindel, where she fought against Sindel from the Mortal Kombat series.

Dinah Laurel Lance was born into a family of crime fighters. Her father, Larry Lance, was a police officer, while her mother, Dinah Drake, was the original Black Canary. The younger Dinah chose to become a crime-fighter at the age of nineteen, despite her mother's wishes to the contrary.

Following a rigorous training program under the watchful eye of a former colleague and life-long friend of the original Black Canary, Ted Grant, also known as Wildcat, Dinah took up her mother's identity and adopted her costume as her own. Her sonic powers were given by a byproduct of her possession of the metagene, making her a metahuman since birth.

Black Canary makes a small cameo at the end of Green Arrow VS Hawkeye, where she can be seen posing next to Hawkeye after he successfully killed Green Arrow. 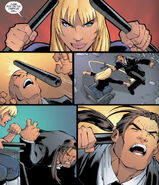 Bo Staff
Add a photo to this gallery

Retrieved from "https://deathbattle.fandom.com/wiki/Black_Canary?oldid=1063374"
Community content is available under CC-BY-SA unless otherwise noted.