Natalia "Natasha" Alianovna Romanova, AKA Black Widow, is a superheroine from Marvel Comics. She appeared in the 106th episode of DEATH BATTLE!, Black Widow VS Widowmaker, where she fought against Widowmaker from the Overwatch series.

Born in the USSR, Natalia Alianovna Romanova was recruited by the KGB at a young age for the dying Soviet Union's assassin program as part of the Red Room. After a childhood of psychological and physical modifications (such as sterilization), Romanova became one of the world's greatest assassins under the code name Black Widow. Romanova eventually defects to the U.S. as an agent of S.H.I.E.L.D. after meeting Clint Barton whom she developed a lasting partnership with, going by the alias Natasha Romanov. Natasha would also become a member of the Avengers where she fights alongside her fellow teammates.

Black Widow makes a brief cameo appearance as a statue during Weiss VS Mitsuru.

Black Widow appeared in the Season 1 Finale of One Minute Melee, where she fought against Catwoman from DC Comics and lost.

She later appeared in Goku VS Sonic?, where she was seen on a rooftop refusing to fight Goku's clone after watching her fellow Avengers getting stomped by him, and in Saitama VS Superman, where she ended the fight by telling Superman that Saitama wasn't the source of the destruction that Goku's clone caused. 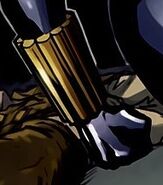 Widow's Bite
Add a photo to this gallery

Retrieved from "https://deathbattle.fandom.com/wiki/Black_Widow?oldid=1077183"
Community content is available under CC-BY-SA unless otherwise noted.