James "Jimmy" Blanka is a protagonist from the Street Fighter series. He appeared in the 24th episode of DEATH BATTLE!, Pikachu VS Blanka, where he fought against Pikachu from the Pokémon series.

As a child, Blanka (real name James "Jimmy" Blanka) was a pale-skinned Brazilian boy, until a horrific plane-crashed left him the sole survivor, stranded in the Amazon. With all the predators living in the area and with no way of escaping, he was forced to camouflage himself day and night. After many years of this, his body absorbed so much chlorophyll, that his skin turned into a permanent green hue. Before being able to fight the predators himself, Blanka had to live off of Electric Eels as his primary food source. He eventually made it to civilization accidently, where he made a friend in Dan Hibiki. After making it to the city, he entered the 2nd World Warrior Tournament and discovered that he was one of the more agile combatants there, and even though he was not victorious, through it he managed to rediscover his mother and hometown.

Blanka makes a cameo in Ken VS Terry, in which he watched Ken Masters fight Dan and Terry Bogard with his friend Sakura and Ken's student, Sean. This cameo extends to Deadpool VS Pinkie Pie. 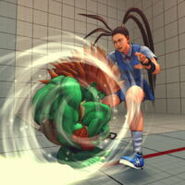 Amazon River Run
Add a photo to this gallery

Retrieved from "https://deathbattle.fandom.com/wiki/Blanka?oldid=1009436"
Community content is available under CC-BY-SA unless otherwise noted.