Blastoise is a creature from the Pokémon series. It appeared in the 33rd episode of DEATH BATTLE!, the Pokémon Battle Royale, where it fought against fellow Starter Pokémon Venusaur and Charizard.

Blastoise is a Water type Pokémon and the final evolution of the Kanto Starter Squirtle. They are stubborn fighters and mostly found around large bodies of water.

They prioritize offense and defense in favor of speed, prefering to shoot Hydro Pumps at enemies from afar with their extremely powerful water jets on each shoulder and prefering to simply retreat into their very durable shell rather than dodging incoming attacks. 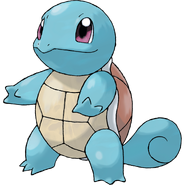 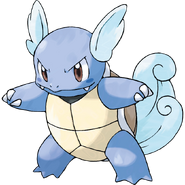 Skull Bash
Add a photo to this gallery

Retrieved from "https://deathbattle.fandom.com/wiki/Blastoise?oldid=1073862"
Community content is available under CC-BY-SA unless otherwise noted.