Boba Fett is an antagonist from the Star Wars series. He appeared in the first episode and Series Premiere of DEATH BATTLE!, Boba Fett VS Samus Aran, as well as the remastered version in the 43rd episode, where he fought against Samus Aran from the Metroid series.

After the feared bounty hunter, Jango Fett, had himself cloned and was told to offer the army of the trained twins to the galaxy's Republic to aid them in their battle against the evil Separatists, he got the urge to want a son. So he made a special clone from the batch for himself and named him Boba, and trained his "son" in many ways, hoping for him to grow up to be a deadly bounty hunter just like him. But when Boba was 10, his father was decapitated by Mace Windu during a large conflict on the desert planet of Geonosis. Boba swore to avenge his father and took his place as the galaxy's deadliest and most cunning bounty hunter.

Boba Fett holding his own against Darth Vader

Boba Fett holding his own against Darth Vader again 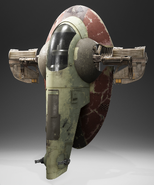 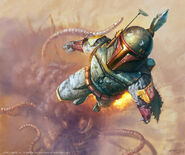 Retrieved from "https://deathbattle.fandom.com/wiki/Boba_Fett?oldid=1078591"
Community content is available under CC-BY-SA unless otherwise noted.