Bowser is the main antagonist of the Super Mario series. He appeared in the 59th episode of DEATH BATTLE!, Bowser VS Ganon, where he fought against Ganondorf from the The Legend of Zelda series.

King Bowser Koopa is the leader of the Koopa Troop and has been the arch-nemesis of Mario for decades. Though Bowser most commonly kidnaps Princess Peach to get control of the Mushroom Kingdom, Bowser has joined forces with Mario in rare cases when they have a common enemy.

Bowser appeared in Season 1 of One Minute Melee, where he fought against Dr. Eggman from the Sonic the Hedgehog series and won.

He makes a cameo after Bowser Jr. VS Metal Sonic, where he witnesses his son getting defeated by Mecha Sonic. The scene ends with Bowser staring at Mecha Sonic, indicating that the two are going to fight.

He reappeares in Season 3, where he fought against Mecha Sonic from the Sonic the Hedgehog series and won.

In Goomba VS Waddle Dee, Bowser takes a vacation after the last two episodes to play against King Dedede in a tennis match. While they play, their armies of Goombas and Waddle Dees go to war and tried to kill each other. The two kings square off in the end, hinting at the eventual fight between the two.

He reappeared again in Season 6, where he fought against King Dedede from the Kirby series and won.

Bowser appeared in his 8-bit form in Ronald Mcdonald vs Colonel Sanders. He is seen with Wario who is eating his burger while Bowser is watching him. He again appeared in Mario VS Luigi, where he ends the fight by sending the two brothers flying after they ruined Bowser Jr.'s birthday party.

Bowser in his Koopa Clown Car

Bowser with a tennis racket 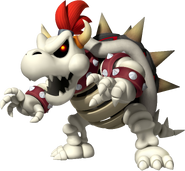 Size Growth
Add a photo to this gallery

Retrieved from "https://deathbattle.fandom.com/wiki/Bowser?oldid=1059981"
Community content is available under CC-BY-SA unless otherwise noted.