Bucky O'Hare is the main protagonist of the series of the same name. He appeared in the 30th episode of DEATH BATTLE!, Fox McCloud VS Bucky O'Hare, where he fought against Fox McCloud from the Star Fox series.

As a graduate of the Genus Academy and trained by Damaron Jabok. Bucky O'Hare and his crew are the leaders in the rebellion against the Evil Toad Empire in the Aniverse. 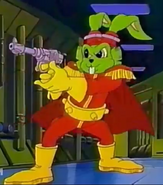 Bucky's Jetpack
Add a photo to this gallery