Steven "Steve" Rogers, AKA Captain America, is a superhero from Marvel Comics. He appeared in the 36th episode of DEATH BATTLE!, Batman VS Captain America, where he fought against Batman from DC Comics.

In the 1930s, World War II loomed on the horizon. A young man named Steven "Steve" Rogers tried time and again to serve his country by enlisting in the army, only to be rejected every time due to his frail body and medical problems. Finally, he was given an offer by Dr. Abraham Erskine: Steve would finally be allowed into the army provided he volunteered to test Dr. Erskine's breakthrough formula, the super-soldier serum.

The formula was an astounding success, bringing Steve Rogers to the peak of human physical performance. Clad in a striking armored uniform and equipped with a virtually unbreakable Vibranium shield, Steve was christened as Captain America. He then proceeded to tear a swath through the forces of the Axis Powers before being accidentally frozen alive in the arctic for 70 years. Having returned today, Captain America continues the fight for truth, justice, and the American way.

Captain America's fight with Batman was briefly seen in Chuck Norris VS Segata Sanshiro when the two martial artists clashed.

Captain America had a cameo in Flash VS Quicksilver. He arrived at New York in a police car (running someone over along the way), to rescue a girl from a burning building. The girl falls as he watches, and then the encounter between the two speedsters starts.

In Deadpool VS Pinkie Pie, Deadpool breaks into his fight with Batman. In the part where Steve throws his shield in the middle of Batman's smoke grenades, Deadpool dresses up like Batman and grabs the shield instead. He then throws the shield right into Steve's face. Both Captain America and Batman can also be seen in the thumbnail for their episode, when the two 4th Wall breakers enter YouTube.

Captain America appeared in the Season 3 April Fools episode of One Minute Melee, Goku vs Sonic?, along with the other Avengers to challenge Son Goku and lost. He also makes a brief appearance at the start of Saitama vs Superman, during a recap of the April Fools episode.

Later, he appeared in Season 3, where he fought against Guile from the Street Fighter series and won.

Captain America made a cameo appearance in DBX at the end of Donald Trump VS Hillary Clinton, where after Trump and Clinton were killed in an explosion, he questions what happened and it then cuts to a talking bald eagle who was telling the story of how Captain America became president of the United States for eternity. 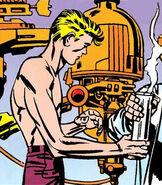 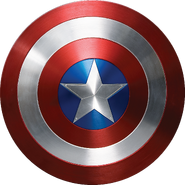 Super Soldier Serum
Add a photo to this gallery

Retrieved from "https://deathbattle.fandom.com/wiki/Captain_America?oldid=1084308"
Community content is available under CC-BY-SA unless otherwise noted.