Captain Falcon is the main protagonist of the F-Zero series. He appeared in the 111th episode of DEATH BATTLE!, Johnny Cage VS Captain Falcon, where he fought against Johnny Cage from the Mortal Kombat series.

Captain Falcon is a racer from the futuristic city of Port Town whose past is shrouded in mystery. He pilots the Blue Falcon in the F-Zero Grand Prix, which he has won a total of three times. Beyond racing, he is quite well-known as an accomplished bounty hunter who has brought in a large number of criminals.

Captain Falcon appeared in Season 1 of One Minute Melee, where he fought against Captain Commando from the series of the same name and won.

Captain Falcon appeared in Season 2 of DBX, where he fought against Viewtiful Joe from the series of the same name and ended up tying with him.

Captain Falcon appeared in the Season 1 Finale of Death Race, where he competed in his Blue Falcon against Mario in his Standard Kart from the Super Mario series, Sonic the Hedgehog in his Speed Star from the series of the same name, Doc Brown in his DeLorean from the Back to the Future series, Takumi Fujiwara in his Toyota AE86 from the Initial D series and a Scout Trooper on a Speeder Bike from the Star Wars series.

He was the second racer eliminated after jumping out of his Blue Falcon to Falcon Punch a large spike pinball before Sonic sends him flying off the track with the Speed Star. 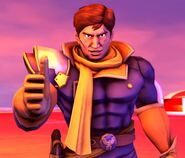 Knee Smash
Add a photo to this gallery

Retrieved from "https://deathbattle.fandom.com/wiki/Captain_Falcon?oldid=1123077"
Community content is available under CC-BY-SA unless otherwise noted.