Cletus Kasady, AKA Carnage, is a supervillain from Marvel Comics. He appeared in the 97th episode of DEATH BATTLE!, Carnage VS Lucy, where he fought against Lucy from the Elfen Lied series.

Cletus Kasady was a disturbed child who eventually grew up into a serial killer and killed eleven people before being caught and arrested. During his time in prison, he became cellmates with Eddie Brock, until the latter escaped after the Venom symbiote bonded with him again. However, the symbiote unknowingly left an offspring in the cell, which then bonded with Kasady through his bloodstream. This gave birth to Carnage, who became one of Spider-Man's and Venom’s toughest and most brutal foes.

Carnage morphing his arms into weapons 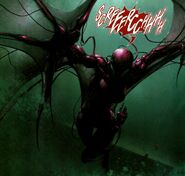 Carnage sprouting wings to fly
Add a photo to this gallery

Retrieved from "https://deathbattle.fandom.com/wiki/Carnage?oldid=1080479"
Community content is available under CC-BY-SA unless otherwise noted.