Start a Wiki
Carlos "Chuck" Norris is a real life person, who eventually became a meme. He appeared in the 44th episode of DEATH BATTLE!, Chuck Norris VS Segata Sanshiro, where he fought against Sega Saturn mascot Segata Sanshiro.

Chuck Norris is an American martial artist and actor. After serving in the United States Air Force, he began his rise to fame as a martial artist, and has since founded his own school, Chun Kuk Do.

Norris appeared in a number of action films, such as Way of the Dragon, in which he starred alongside Bruce Lee, and was The Cannon Group's leading star in the 1980s. He played the starring role in the television series Walker, Texas Ranger from 1993 until 2001. He is best known for being an internet meme where people claim he can do insane feats.

The constellation Chuck and Segata formed at the end of the fight appears in the sky of Guts VS Nightmare.

In Solid Snake VS Sam Fisher, the ending of Chuck and Segata's fight was seen on the computer Sam was hacking, and a snapshot of the fight was on the inside of Snake's cardboard box.

In Naruto VS Ichigo, Chuck and his opponent briefly stop their fight to look at Naruto's final attack against Ichigo before continuing their fight.

The constellation of Chuck and Segata returned briefly during Doctor Strange's and Doctor Fate's reality-warping battle.

The constellation of Chuck and Segata returned yet again during Beerus VS Sailor Galaxia after both destroyers erased the asteroid field that was once Earth.

The Chuck-Segata Constellation at the end of the fight 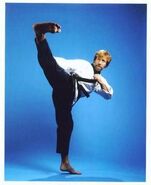 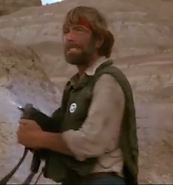 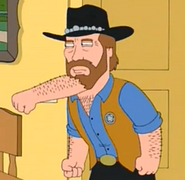 Fist under the beard 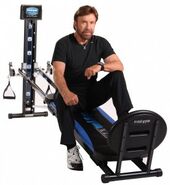 The Total Gym
Add a photo to this gallery

Retrieved from "https://deathbattle.fandom.com/wiki/Chuck_Norris?oldid=1067062"
Community content is available under CC-BY-SA unless otherwise noted.