Cloud Strife is one of the main protagonists of the Final Fantasy series. He appeared in the 22nd episode of DEATH BATTLE!, Link VS Cloud, where he fought against Link from the The Legend of Zelda series.

At a young age, Cloud strove to join the illustrious Shinra organization to become a First Class SOLDIER like his hero, Sephiroth, but he never qualified and instead enlisted as an infantryman in Shinra's army. During a mission to his hometown, Nibelheim, Sephiroth went mad after learning about his origins, forcing Cloud and his friend Zack Fair to attack their former idol.

Shortly afterward, the two were forcefully exposed to Mako radiation, a raw energy drained from the planet itself. Zack helped Cloud escape at the cost of his life. Due to exposure to Mako radiation and the injection of Jenova's cells, Cloud inadvertently creates a false personality largely based on Zack's and becomes a mercenary. Once he found out Sephiroth was alive and was planning to destroy the planet, he and his party set out to stop the villain at all costs.

Cloud can be seen during Deadpool VS Mask in one of the alternate realities that were shown in the background when Deadpool was using the Continuity Gem. Instead of the strike being blocked, Cloud cuts Link cleanly in half.

Cloud appeared in Season 2 of DBX, where he fought against Guts from the Berserk series and won.

Cloud appeared in a Bonus Episode in Season 6 of One Minute Melee, where he fought against his DEATH BATTLE! opponent Link and lost again. 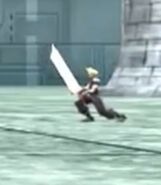 Omnislash
Add a photo to this gallery