Crash Bandicoot is the main protagonist of the series of the same name. He appeared in the 91st episode of DEATH BATTLE!, Crash VS Spyro, where he fought against Spyro the Dragon from the Spyro series.

Crash Bandicoot is an expressive, wacky, lazy, and somewhat dull-witted, genetically enhanced bandicoot created by the evil scientist, Dr. Neo Cortex. He was originally made to be part of Cortex's army of mutants but after the Cortex Vortex failed to mind control him, the bandicoot fled from his castle. Upon realizing Tawna was held captive, he traveled across islands to save Tawna and halt Cortex's plan, defeating his other experiments and allies on the way. Afterwards, Crash lives on Wumpa Island with sister, Coco, a masked spirit and father figure, Aku Aku, and reformed ally, Crunch, usually rising up to the task whenever a crisis is averted by Cortex or other threats.

Crash makes a cameo in Guile vs Paul Phoenix DBX, where he is seen running on a treadmill in the Macho 'Mon Gym. 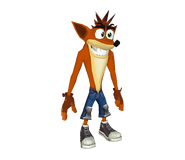 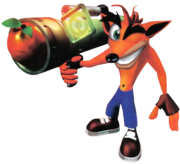 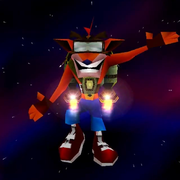 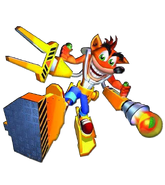 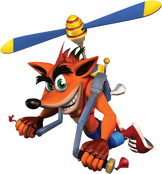 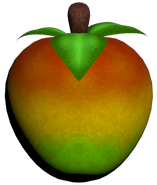 Wumpa Fruits
Add a photo to this gallery