Crona Gorgon is a protagonist from the Soul Eater series. They appeared in the 134th episode of DEATH BATTLE!, Venom VS Crona, where they fought against Venom from Marvel Comics.

As a toddler, Crona was subjected to Medusa's experiment involving a blood transfusion of a madness-inducing liquid called Black Blood. As a result, they entered a forced symbiosis with a weapon that was melted into the Black Blood, the Demon Sword Ragnarok. From there, from killing small animals to suffering various forms of torture through Raganrok's bullying and a merciless mother's methods of punishment, Crona was raised for Medusa's purpose to destroy the world by consuming enough souls to become a Kishin and then merge with the original Kishin Asura.

After they became friends with Maka, however, Crona began to become surer of themself, but still had difficulty making decisions. They soon began to distinguish the difference between good and evil.

Note: Ragnarok's quotes will be highlighted in bold. 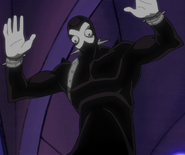 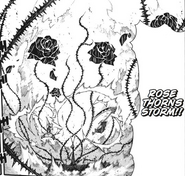 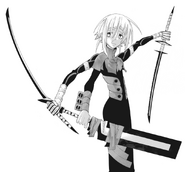 Retrieved from "https://deathbattle.fandom.com/wiki/Crona?oldid=1095624"
Community content is available under CC-BY-SA unless otherwise noted.