Dan Hibiki is a protagonist from the Street Fighter series. He appeared in the 53rd episode of DEATH BATTLE!, Hercule Satan VS Dan Hibiki, where he fought against Hercule Satan from the Dragon Ball series.

Dan was the son of mixed martial arts master Go Hibiki, who was murdered by Sagat after he was responsible for gouging out the Muay Thai champion's eye. Dan then went on a quest to avenge his father's death by training to become a fighter, but was expelled from Gouken's dojo when his motivations were learned. Dan thus developed his own style of Gouken's martial art merged with Muay Thai elements and called it Saikyō-ryū, or "Strongest style," despite the complete weakness of his techniques.

After supposedly defeating Sagat (which only happened because Sagat let him win), Dan focused his attention on developing his own dojo to teach others of Saikyō-ryū, and befriended Sakura and Blanka.

Dan made a cameo appearance in Ken VS Terry, where he was quickly defeated by Ken Masters after challenging him. The dazed Dan then joins Blanka, Sakura, and Sean to watch Ken fight Terry Bogard. When the dojo starts falling apart due to the power of the two men, Dan gets crushed by a falling wooden pillar. This cameo also extends to Deadpool VS Pinkie Pie.

Dan appeared in Season 1 of One Minute Melee, where he fought against his DEATH BATTLE! opponent Hercule Satan and lost.

Dan made a cameo appearance in the DBX Ken VS Blaziken, where he got quickly defeated by Ken before the fight started. 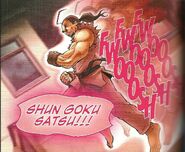 Dan preforming the Raging Demon
Add a photo to this gallery

Retrieved from "https://deathbattle.fandom.com/wiki/Dan_Hibiki?oldid=1049347"
Community content is available under CC-BY-SA unless otherwise noted.