Uxas, AKA Darkseid, is a supervillain from DC Comics. He appeared in the 103rd episode and Season 5 Finale of DEATH BATTLE!, Thanos VS Darkseid, where he fought against Thanos from Marvel Comics.

Long ago in the Fourth World, Uxas lived on the planet, Urgrund where his people worshipped the Old Gods who needed their prayers to survive. But Uxas despised the Old Gods and, after one of them rampaged in his village, manipulated the deities to fight amongst themselves in the event known as Ragnarok. Uxas proceeds to absorb the fallen gods' powers for himself, transforming into the first New God: Darkseid. After Iyaza was transformed into a New God by the Sky Father when he begged for the return of his beloved Avia from dead, the brothers battled before Darkseid used his power to split the planet in two and crafts one half into a new world: Apokolips, where he reigns over his slave population of immortals as god-king with the only opposition being his brother, now known as Highfather, and the New Gods of New Genesis. In time, Darkseid learned of other worlds beyond the Fourth World and sought to counter the known universe while solving the Anti-Life Equation to rule all life. But he receives new opposition in Superman and the Justice League. 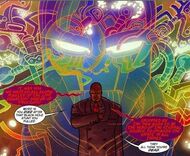 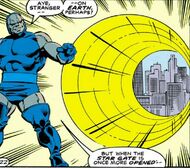 Darkseid on his throne
Add a photo to this gallery

Retrieved from "https://deathbattle.fandom.com/wiki/Darkseid?oldid=1063415"
Community content is available under CC-BY-SA unless otherwise noted.