Deadpool made several cameos during Thanos VS Darkseid. He first appeared during Thanos' analysis, where he explained his love triangle with Death and Thanos again. He later appeared at the start of the fight, where he and Darkseid had a quick chat, where Deadpool tried to sell Thanos' throne, before Thanos appeared and turned him into confetti with the Reality Stone. He later reappeared yet again in the first of Thanos' many deaths in the Omega Santion, where he kissed Death in front of him and then shot him. His last appearence in the episode was when he stole Boomstick's end pun.

Deadpool made a small cameo during Lobo's analysis during Ghost Rider VS Lobo, and his sudden appearance terrified both Wiz and Boomstick enough for Wiz to destroy the TV screen. After Deadpool spookingly told them that he's never truly gone even after the screen broke, Wiz mentioned that he is gonna find a way to kill him teasing Deadpool VS Mask.

Deadpool appeared in Season 1 of One Minute Melee, where he fought against his first DEATH BATTLE! opponent Deathstroke and lost. 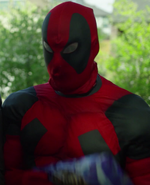 Deadpool from Earth-12101 decapitating Wolverine with a Carbonadium Sword

Deadpool without his mask on 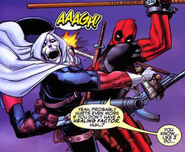 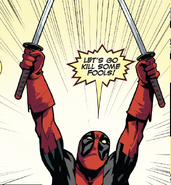 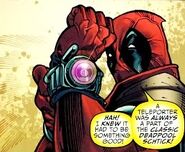 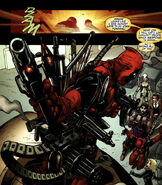 Fourth Wall Awareness
Add a photo to this gallery

Retrieved from "https://deathbattle.fandom.com/wiki/Deadpool?oldid=1078906"
Community content is available under CC-BY-SA unless otherwise noted.