Invader (S1—4)
Wiz and Boomstick (S5—)
Pitting pop culture's deadliest characters in a duel to the death! Experts Wiz and Boomstick analyze each fighter's weapons, armor, and skills... and then the battle begins! Who will win? Who will die?

Death Battle (stylized as DEATH BATTLE!) is a popular web series created by Ben Singer and presented by ScrewAttack. The show pits two or more fictional characters from different medias such as movies, comics, manga, television programs, literature, video games, advertisements, public service announcements, and even mythology and create a simulated battle to the death. The characters are analyzed with their respective powers, strengths, and weaknesses, to determine a winner.

The show's first season has 25 episodes. The first 18 episodes were featured exclusively on ScrewAttack's YouTube account, and starting with episode 19 the series is now posted to the redesigned Screwattack.com, with a delayed posting of past fights to their YouTube page.

Season 2 premiered on May 31, 2013, more than four months after the first season finale. The season ended on December 15, 2015, with a total of 32 episodes for the season, bringing the total number of DEATH BATTLE! episodes to 57.

Season 3 premiered on March 16, 2016 in order to focus on finding more staff to expand their series. The season ended on December 21st, 2016, with a total of 14 episodes for the season, the shortest season so far, bringing the total number of DEATH BATTLE! episodes to 71.

Season 4 premiered on February 1, 2017 with the first fight revealed in January 2017. The season ended on December 20th, 2017 with a total of 16 episodes, bringing the total number of DEATH BATTLE! episodes to 87.

On February 4, 2019, ScrewAttack announced that they changed the name of the channel to keep up with the YouTube landscape.

Season 8 premiered on March 7th, 2021. The season ended on December 19, 2021 with a total of 16 episodes, bringing the total number of DEATH BATTLE! episodes to 155. As the special 10th anniversary season, every matchup has the theme of having a certain history with the show, such as matchups certain crew members really wanted (e.g. Shadow VS Ryuko), "legacy" matchups that have been popular for a long time (e.g. DIO VS Alucard), matchups that feature characters who have direct history with the show (e.g. Yoda VS King Mickey), or matchups crew members have joked about (e.g. Macho Man VS Kool-Aid Man).

The idea of the show is to pit two or more fictional characters and pit them against each other in a simulated "death battle". Before the start of the battle, an analysis of the character's powers are listed together with their other stats such as strengths, weaknesses, physicality (weight, height, age, intellect), and weapons. This is done by extensive research of each of the characters, and taking notes from calculating the power of various abilities, official websites, and franchise encyclopedias. All other traits will be represented with accuracy based on the character's canon universes. If a character has multiple versions, said character (such as Link) will be composited throughout all forms of media unless a certain version is too deviant from the main source (for example, Sonic the Hedgehog and Archie Sonic are considered two different characters). After studying the characters, a conclusion is made to who is the winner and the reason they are triumphant. This is shown in the form of a simulated battle in either 2D sprites, 3D CGI, hand-drawn animation, or live action. Many combatants are voiced by YouTube personalities such as MasakoX and ItsJustSomeRandomGuy or professional voice actors such as Kira Buckland and Nicholas Andrew Louie.

Because the show is entitled "DEATH BATTLE!" and its idea is to create a virtual "fight to the death", characters in the virtual simulation kill their opponents, even though many of them are canonically averse to killing (such as Batman, the Teenage Mutant Ninja Turtles, Steven Universe, and Rebecca Black). These are made as a "what if" scenario for entertainment purposes, and does not go against the accuracy of the analysis of the respective winner.

Prior to Season 7, ScrewAttack typically released a new episode three weeks after the current episode. In the first two weeks, they release a preview of a combatant analysis, primarily about their background, and in the third week the episode is released at around 12:00 PM CST.

Starting with Season 7, Death Battles have gone from one every 3 weeks to every 2 weeks. The schedule is similar to the old one with teasers of the two combatants being released the Monday and Wednesday before the episode is released before releasing the episode the following Sunday for First Members and the day after for everyone. In the middle of the season, the show will generally take a short break, with DBX taking its place for an unspecified amount of weeks before Death Battle's return.

In order to promote DEATH BATTLE!, ScrewAttack has released merchandise, primarily T-Shirts to help spread the word about the show. Due to merging with Rooster Teeth and its family, most T-Shirts are available on the Rooster Teeth store. 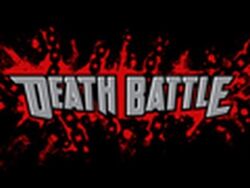 There are currently four confirmed match-ups.