Slade Wilson, AKA Deathstroke, is a supervillain from DC Comics. He appeared in the 39th episode of DEATH BATTLE!, Deadpool VS Deathstroke, where he fought against Deadpool from Marvel Comics.

A prodigy in the US Army, Slade Wilson was enhanced further by an experimental procedure. After his re-assignment was rejected, he became the world's deadliest assassin Deathstroke, continually taking on the Teen Titans, Batman, and even the Justice League.

Deathstroke appeared in Season 1 of One Minute Melee, where he fought against his DEATH BATTLE! opponent Deadpool and won.

His Teen Titans version later made a cameo in the Season 6 Premiere, Toph VS Terra, where he congratulated Toph on her victory from afar. 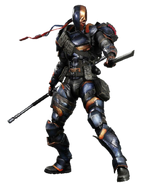 Deathstroke without his mask
Add a photo to this gallery

Retrieved from "https://deathbattle.fandom.com/wiki/Deathstroke?oldid=1077195"
Community content is available under CC-BY-SA unless otherwise noted.