Dig Dug is an expert excavator and executioner. He consistently traverses the underground to slay dragons. His real name is Taizo Hori, which literally means "I want to dig". He is also the father of the more recent phenomenon, Mr. Driller. 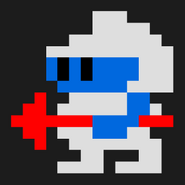 Retrieved from "https://deathbattle.fandom.com/wiki/Dig_Dug?oldid=1009339"
Community content is available under CC-BY-SA unless otherwise noted.