Victor Von Doom, AKA Doctor Doom, is a supervillain from Marvel Comics. He appeared in the 49th episode of DEATH BATTLE!, Darth Vader VS Doctor Doom, where he fought against Darth Vader from the Star Wars series.

Victor Von Doom was born decades ago to a tribe of Latverian Romani people under the rule of an unnamed nobleman called the Baron. Victor's mother was witch Cynthia Von Doom who died by Mephisto's hand while von Doom was young. His father, Werner, was the leader of the tribe and a renowned medicine man who kept his wife's sorceress life quiet in order to protect Victor from a similar fate. Once in the United States, Victor met fellow student and future nemesis Reed Richards, who was intended to be his roommate, but von Doom disliked him and asked for another roommate. After a time, Victor constructed a machine intended to communicate with the dead. Though Richards tried to warn him about a flaw in the machine, seeing his calculations were a few decimals off, Victor continued on with disastrous results. The machine violently failed and the resulting explosion seemingly severely damaged his face.

Expelled after the accident, Victor traveled the world until he collapsed on a Tibetan mountainside. Rescued by a clan of monks, Victor quickly mastered the monks' disciplines as well as the monks themselves. Victor then forged himself a suit of armor, complete with a scowling mask, and took the name Doctor Doom. As Doctor Doom, he would go on to menace those he felt responsible for his accident—primarily, Reed Richards of the Fantastic Four. He succeeded in taking over Latveria, taking an interest in the welfare of the Roma. Ever since his first appearance he's been one of the biggest antagonists of the Marvel Universe and its heroes, with his biggest enemies being the Fantastic Four. 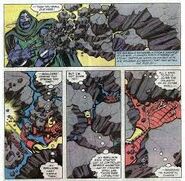 Teleportion
Add a photo to this gallery

Retrieved from "https://deathbattle.fandom.com/wiki/Doctor_Doom?oldid=1074261"
Community content is available under CC-BY-SA unless otherwise noted.