During an expedition in the Valley of Ur in Mesopotamia, young Kent Nelson and his archaeologist father Sven Nelson stumbled upon a statue containing the great Nabu, a Lord of Order and former adviser to the Egyptian pharaohs from an alien planet.

Upon releasing Nabu, poisonous gas was then unleashed which killed Kent's father. Feeling sorry for the boy's fate, Nabu decided to teach him the secrets of the universe and train him to become an agent of the Lords of Order. After completing his training, Kent was given an amulet, a cloak, and a helmet and was from that point on known as the superhero Doctor Fate. 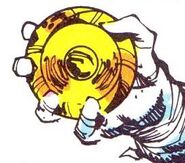 True Fate
Add a photo to this gallery

Retrieved from "https://deathbattle.fandom.com/wiki/Doctor_Fate?oldid=1063428"
Community content is available under CC-BY-SA unless otherwise noted.