Doctor Stephen Strange is a superhero from Marvel Comics. He appeared in the 94th episode of DEATH BATTLE!, Doctor Strange VS Doctor Fate, where he fought against Doctor Fate from DC Comics.

Stephen Vincent Strange was a brilliant, but arrogant surgeon who cared more about wealth than his own career. However, a car accident left his hands permanently injured, unable to stop shaking, and he lost his job and money in vain attempts to fix his condition.

Overhearing about a person called The Ancient One that could cure any ailment, Strange traveled to the Himalayas, and became his apprentice, learning about the mystic arts. After his training, he went back to New York City, took up residence within the Sanctum Sanctorum, and became the hero known as Doctor Strange.

Doctor Strange makes a small cameo alongside The Hulk and Doomsday during Deadpool VS Pinkie Pie, after Deadpool and Pinkie Pie entered YouTube, as they can be seen in the thumbnail for the second episode of DEATH BATTLE! Cast "Hulk & Doomsday Get Strange". 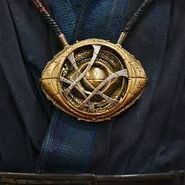 The Wand of Watoomb
Add a photo to this gallery

Retrieved from "https://deathbattle.fandom.com/wiki/Doctor_Strange?oldid=1081821"
Community content is available under CC-BY-SA unless otherwise noted.