Doomsday is a supervillain from DC Comics. He appeared in the 69th episode of DEATH BATTLE!, Hulk VS Doomsday, where he fought against The Hulk from Marvel Comics.

Originally known as "The Ultimate", Doomsday was born in prehistoric times on Krypton, long before the humanoid Kryptonian race gained dominance.  In a cruel experiment involving evolution, intended to create the perfect living being, the alien scientist Bertron released a humanoid infant onto the surface of the planet, where he was promptly killed by the harsh environment. The baby's remains were collected and used to clone a stronger version over and over for decades as a form of accelerated natural evolution. The agony of these repeated deaths was recorded in his genes, driving the creature to hate all life.

The Ultimate escaped Krypton via a ship that regularly arrived to deliver supplies to Bertron (who had wanted little contact with the planet's natives) and went on a killing spree across several planets. Later known as the "Doomsday," he mysteriously bashed his way out of a metallic holding cell miles underground, dug his way up, and began senselessly killing and destroying everything he saw. Doomsday landed on Earth to kill everyone in Metropolis and in the process, killed one of the most iconic heroes of all time, Superman, in an intense battle to the death.

Doomsday makes a small cameo alongside The Hulk and Doctor Strange during Deadpool VS Pinkie Pie, after Deadpool and Pinkie Pie entered YouTube, as they can be seen in the thumbnail for the second episode of DEATH BATTLE! Cast "Hulk & Doomsday Get Strange".

Doomsday appeared in Season 2 of DBX, where he fought Broly from the Dragon Ball series and won.

He later made a cameo appearance at the beginning of the Season 5 Finale, Superman VS Saitama, where he was quickly defeated by Saitama. 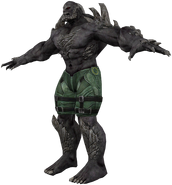 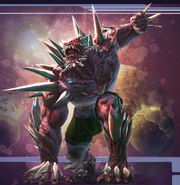 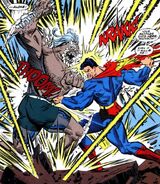 Doomsday as Drumsday, as seen in the Death Battle Bloopers - Ken VS Terry & Hulk VS Doomsday
Add a photo to this gallery

Retrieved from "https://deathbattle.fandom.com/wiki/Doomsday?oldid=1073321"
Community content is available under CC-BY-SA unless otherwise noted.