The Dragonzord, piloted by Tommy Oliver, is a protagonist from the Power Rangers series. It appeared in the 114th episode of DEATH BATTLE!, Dragonzord VS Mechagodzilla, where it fought against Mechagodzilla from the Godzilla series.

The Dragonzord was the sixth Dino Zord and originally laid dormant in the sea off the coast of Angel Grove for an indeterminate number of years. However, once Rita Repulsa had her own Green Ranger, she awakened it once again. The Dragonzord was equipped with a tail with a drill bit on its end and could fire missiles from his fingertips. Unlike the other Dino Zords, it can stand on its own against a monster without combining it into a Megazord, although it does form the Dragonzord Fighting mode with the Mastadon, Triceratops, and Sabertooth Tiger Dino Zords.

Its main pilot is Tommy Oliver, who was a new student at Angel Grove, but his skills caught the eye of Rita, and she brainwashed him into her own Green Ranger. Tommy would fight against the Rangers in multiple battles until Jason (the Red Ranger) broke him out of the spell. Now free, Tommy and the Dragonzord joined the Rangers in their fight against Rita.

Dragonzord's head can be seen in the background in Goro's trophy room during Goro VS Machamp.

Note: These are Tommy's quotes. 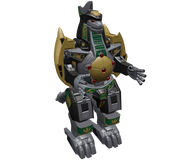 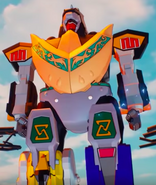 Dragonzord's cameo in Goro VS Machamp

The Green Ranger, aka Tommy Oliver 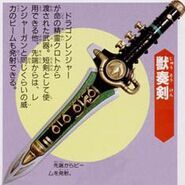 Shockwaves
Add a photo to this gallery

Retrieved from "https://deathbattle.fandom.com/wiki/Dragonzord?oldid=1074196"
Community content is available under CC-BY-SA unless otherwise noted.