Edward Elric is the main protagonist of the Fullmetal Alchemist series. He appeared in the 112th episode of DEATH BATTLE!, Aang VS Edward Elric, where he fought against Aang from the Avatar: The Last Airbender series.

At a young age, Edward and his younger brother Alphonse studied the art of Alchemy from the notes of their father Hohenheim. However, after their mother died after of illness, the two brothers swore they would bring her back, even if it meant looking into the most taboo of all Alchemy: Human Transmutation. When the two did the transmutation, it horribly backfired as Edward lost his left leg, and Alphonse lost his entire body. Refusing to see his brother gone, Edward sacrificed his right arm to transmute Alphonse's soul into a suit of armor.

Time after this event, Edward was visited by Lt. Colonel Roy Mustang who offered him the chance to join the military and become a State Alchemist as it could help him find a way to return him and his brother to their original forms. Determined to regain what he and his brother lost, Edward received automail prosthetics from Winry and Pinako to replace his missing limbs, and after passing the State Alchemist evaluation, he was given the title of Fullmetal Alchemist. Edward and Alphonse then traveled the state of Amestris to find a way to return themselves into their original bodies, while also uncovering the dark secrets of the state and the military.

Edward appeared in Season 4 of One Minute Melee, where he fought against Joseph Joestar from the JoJo's Bizarre Adventure series and lost. 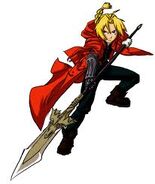 Edward transmuting part of his Automail Arm into a Sword

Alchemic Lightning
Add a photo to this gallery

Retrieved from "https://deathbattle.fandom.com/wiki/Edward_Elric?oldid=1034621"
Community content is available under CC-BY-SA unless otherwise noted.