Erza Scarlet is one of the main protagonists of the Fairy Tail series. She appeared in the 70th episode of DEATH BATTLE!, Zoro VS Erza, where she fought against Roronoa Zoro from the One Piece series.

Erza lived in the Rosemary Village, until it was attacked and she and other children were captured.

Once captured, Erza and other children were enslaved and forced to build the Tower of Heaven. While being asked her name by the other children, Erza said she didn't have a surname so a boy named Jellal Fernandes decided to give her the surname "Scarlet" after her scarlet hair. Erza Scarlet soon became close friends with Jellal and the other children. She also formed a strong bond with a slave named Rob, an elderly mage from the Fairy Tail guild, who taught her about magic and his guild.

While Erza and her friends were trying to escape from the tower, they were caught by the guards, who believed Erza was responsible and decided to punish her, causing her to lose her right eye while torturing her, until being rescued by Jellal, who was captured soon after. In order to save him, Erza staged a revolt against their captors so they could escape, which was being successful until the Tower's mages arrived and attacked.

During the attack, Erza watched how her friend Rob sacrificed himself to protect her from another mage's attack and, in her rage, Erza activated her Magic Powers for the first time and used it to turn all of the discarded weapons and tools around her against the guards, finishing the revolt.

Right after escaping the Tower, Erza Scarlet joined the Fairy Tail guild and, in the year X780, she passed Fairy Tail's annually held S-Class Mage Promotion Trial, becoming the youngest member of the guild to do so at the age of fifteen. 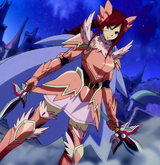 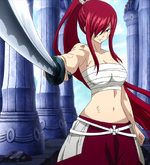 Clear Heart Clothing
Add a photo to this gallery

Retrieved from "https://deathbattle.fandom.com/wiki/Erza_Scarlet?oldid=1073517"
Community content is available under CC-BY-SA unless otherwise noted.