Frank West is the main protagonist of the Dead Rising series. He appeared in the 93rd episode of DEATH BATTLE!, Leon Kennedy VS Frank West, where he fought against Leon S. Kennedy from the Resident Evil series.

Frank West was a well-known freelance photographer who covered wars, world events, etc. When his career started to fizzle out, he found a lead on an incident at Willamette mall, only to find himself in the middle of a zombie outbreak, forcing him to survive while trying to cover a major story.

Frank West made a cameo appearance at the end of the Season 6 Bonus Episode of One Minute Melee, Ruby Rose VS Spider-Man, where he took pictures of Spider-Man beating up a seemingly innocent girl and said that he was going to sell them to the Daily Bugle. 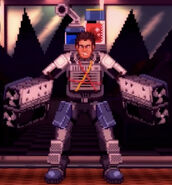 Frank in an Exo Suit 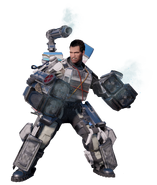 Ice upgrade of the Exo Suit

Reaper
Add a photo to this gallery

Retrieved from "https://deathbattle.fandom.com/wiki/Frank_West?oldid=1009779"
Community content is available under CC-BY-SA unless otherwise noted.