Fulgore is an antagonist from the Killer Instinct series. He appeared in the 34th episode of DEATH BATTLE!, Fulgore VS Sektor, where he fought against Sektor from the Mortal Kombat series.

Fulgore was created by the mega-corporation Ultratech as a way to maintain their dominance of Earth. When manufacturing began, one executive wanted to test its capabilities out by placing a model in the KI tournament. Unfortunately, it was so advanced no AI could keep control over its body.

Meanwhile, Black Eagle, a KI champion from the last tournament, used his fame to spread word about Ultratech's evil. To keep a plug on things, Ultratech kidnapped and killed Eagle, removed his brain, and placed it inside Fulgore's body. With the mind of Eagle inside, Fulgore became an unstoppable fighter. 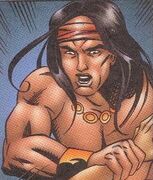 Black Eagle before his fate

Appearing from Cloaking Device
Add a photo to this gallery

Retrieved from "https://deathbattle.fandom.com/wiki/Fulgore?oldid=1055504"
Community content is available under CC-BY-SA unless otherwise noted.