Genos is one of the main protagonists of the One-Punch Man series. He appeared in the 123rd episode of DEATH BATTLE!, Genos VS War Machine, where he fought against War Machine from Marvel Comics.

At age 15, Genos was a human boy living a happy and peaceful life with his family. One day, a crazy cyborg attacked his town, destroying it and killing his family. Genos miraculously survived, but would not have survived long on his own had he not been found by Dr. Kuseno, who was passing through the town in pursuit of the cyborg. Genos begged Dr. Kuseno to transform him into a cyborg, and the scientist complied. Genos was reborn as a cyborg fighting for justice and promised Dr. Kuseno that one day he would find and destroy the cyborg.

For the next four years, Genos traveled from town to town defeating monsters and evil organizations, but was unable to find the whereabouts of the cyborg.

Genos appeared in Season 4 of One Minute Melee, where he fought against Raiden from the Metal Gear series and lost.

He later reappeared in Season 6, where he fought against the Teen Titans version of Cyborg from DC Comics and lost again.

Genos appeared in the Season 1 episode of DBX, Saitama VS Kenshiro, where he attempted to help his master but was ultimately defeated by Kenshiro. 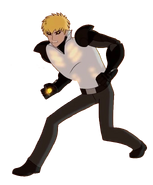 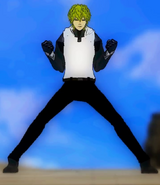 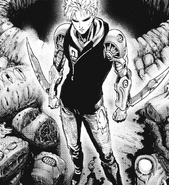 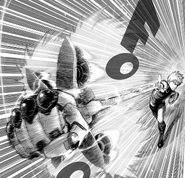 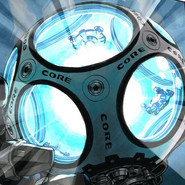 Genos's Core
Add a photo to this gallery

Retrieved from "https://deathbattle.fandom.com/wiki/Genos?oldid=1074098"
Community content is available under CC-BY-SA unless otherwise noted.