Goliath is the main protagonist of the Gargoyles series. He appeared in the 47th episode of DEATH BATTLE!, Beast VS Goliath, where he fought against Beast from Marvel Comics.

In the year 994 A.D., a clan of gargoyle warriors led by their leader Goliath formed a partnership with a Scottish kingdom. They would protect the castle from invaders at night, and the humans would protect them during the day since gargoyle's turn to stone at sunrise. Unfortunately, they faced prejudice against the humans due to their beastly appearance, and were betrayed by the humans they swore to protect. Most of Goliath's clan was destroyed, and thoses that survived were placed under a curse that sealed them in stone forever. However, the curse could be broken if the castle was over the clouds.

Then one thousand years later in 1994, businessman Xanatos had all the stones and foundation of the castle moved from Scotland and on top of his skyscraper in New York City that poked above the clouds. It worked, and the curse was broken, awakening the gargoyles awoke once more. Goliath was then tasked in leading his clan into the modern day world.

Batman Beyond VS Spider-Man 2099

The stone gargoyle which Terry McGinnis is seen perching on bears a strong resemblance to Goliath.

Goliath turned to stone while in broad daylight 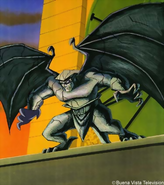 Retrieved from "https://deathbattle.fandom.com/wiki/Goliath?oldid=1074174"
Community content is available under CC-BY-SA unless otherwise noted.