Goro is an antagonist from the Mortal Kombat series. He appeared in the 125th episode of DEATH BATTLE!, Goro VS Machamp, where he fought against Machamp from the Pokémon series.

A member of the four-armed Shokan race, Goro became the Grand Champion of the Mortal Kombat tournament after defeating the Great Kung Lao. Goro celebrated nine consecutive victories in Mortal Kombat and brought more honor to the Shokan race with each victory. He entered the Mortal Kombat tournament to fight for Outworld and to help the emperor, Shao Kahn, achieve his goal: to conquer Earthrealm. In his tenth title defense, however, he faced Liu Kang, a Shaolin monk chosen by the White Lotus Society to represent them. Kang pushed him to his limits and finally defeated the mighty Shokan warrior. In the tournament's aftermath, he went missing after a battle where he fought Kano, Johnny Cage, and Sonya Blade, he was believed to be dead. 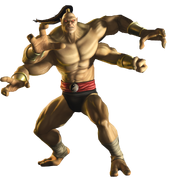 Goro with his Dragon Fangs
Add a photo to this gallery

Retrieved from "https://deathbattle.fandom.com/wiki/Goro?oldid=1079295"
Community content is available under CC-BY-SA unless otherwise noted.