Gray Fullbuster is one of the main protagonists of the Fairy Tail series. He appeared in the 124th episode of DEATH BATTLE!, Gray VS Esdeath, where he fought against Esdeath from the Akame ga Kill! series.

Gray was from a village up in the North, but the entire village was destroyed by the Demon, Deliora. Gray's parents were killed in the incident as well. Lyon, along with Ur, a powerful ice Mage who Jellal claimed could have been one of the Ten Wizard Saints, came investigating Deliora's destruction, and found Gray alive among the ruins. Ur took Gray in as her second student and taught him and Lyon Ice-Make Magic. Gray accepted the training in order to eventually avenge his deceased parents by killing Deliora using Ur's unorthodox methods. Gray also obtained the unusual habit of stripping unconsciously from Ur's training methods.

When Gray heard of Deliora's current location, he decided to challenge it, ignoring Ur and Lyon's warnings. Gray collapsed from battling Deliora and woke up to see Ur battling it. Ur told him to take Lyon and run. Gray carried Lyon and saw that Ur had lost her leg and replaced it with ice. Suddenly, Lyon woke up and tried to cast Iced Shell, but Ur stopped him by freezing him. She explained to Gray that Iced Shell was the only thing that would beat Deliora, and was surprised to know that Lyon had tried to do what she planned. She then used Iced Shell which caused her body to be destroyed. Before turning into ice, she made Gray promise to tell Lyon that she died and told him to step into the future, since she would seal his darkness. The next day, Lyon woke up and discovered Deliora encased in ice and Ur's sacrifice. He berated Gray for Ur's death and the two apprentices parted ways.

Following Ur's advice to find strong wizards in the west, Gray arrived at Fairy Tail and asked the master for a way to reverse the effects of the Iced Shell. Makarov, however, told him that the only method that could possibly reverse it would kill Ur in the process as she lived on as the ice encasing Deliora. 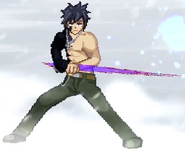 Casting Lost Iced Shell
Add a photo to this gallery

Retrieved from "https://deathbattle.fandom.com/wiki/Gray_Fullbuster?oldid=1073483"
Community content is available under CC-BY-SA unless otherwise noted.