Oliver Queen, AKA Green Arrow, is a superhero from DC Comics. He appeared in the 56th episode of DEATH BATTLE!, Green Arrow VS Hawkeye, where he fought against Hawkeye from Marvel Comics.

Orphaned at a young age, Oliver Queen was a billionaire playboy philanthropist with no sense of responsibility or direction in his life, until one day when he fell off his boat in the middle of the ocean where he is thrown onto a deserted island with nothing but a bow to survive. While there he discovered that criminal China White was smuggling drugs and stopped her.

Changed by these events, Oliver now knows what he wants to do and uses his archery skills to protect Star City as the Green Arrow.

Green Arrow appeared in Season 2 of One Minute Melee, where he fought against his DEATH BATTLE! opponent Hawkeye and won. 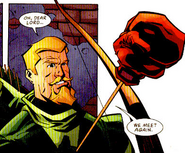 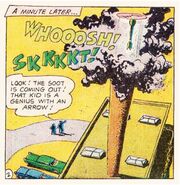 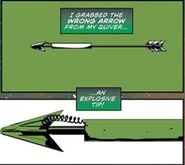 Explosive Arrow
Add a photo to this gallery

Retrieved from "https://deathbattle.fandom.com/wiki/Green_Arrow?oldid=1077200"
Community content is available under CC-BY-SA unless otherwise noted.