Harold "Hal" Jordan, AKA Green Lantern, is a superhero from DC Comics. He appeared in the 109th episode of DEATH BATTLE!, Ben 10 VS Green Lantern, where he fought against Ben Tennyson from the Ben 10 series.

Hal Jordan was born in Coast City, California, his father being a U.S. Air Force test pilot and Hal's role model in life. Unfortunately, his father died during a disastrous flight test, traumatizing the young Hal.

On his 18th birthday, Hal joined the Air Force and became a pilot, living up to his father's memory, and he continued to serve of his country until one fateful day when he discovered a dying alien named Abin Sur. He was a member of the Green Lantern Corps, an intergalactic defense force dedicated to protecting planets organized by sectors, and he needed to pass his Green Lantern Power Ring; a symbol of his authority and source of superhuman abilities, onto one with extraordinary willpower.

Sensing Hal's remarkable will and bravery, the Ring chose him, making Hal the acting Green Lantern of Sector 2814, and in time, Hal would become a founding member of the Justice League, working alongside other heroes to defend Earth and beyond from universal threats. 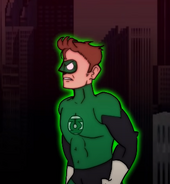 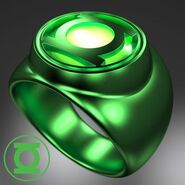 Green Lantern Constructs
Add a photo to this gallery

Retrieved from "https://deathbattle.fandom.com/wiki/Green_Lantern?oldid=1063383"
Community content is available under CC-BY-SA unless otherwise noted.