Guts is the main protagonist of the Berserk series. He appeared in the 45th episode of DEATH BATTLE!, Guts VS Nightmare, where he fought against Nightmare from the Soul Calibur series.

Guts' life has been hell since day one. After being born from the corpse of his hanging mother, a group of mercenaries found him with Shisu taking him in as her child, until she died of the plague.

With nowhere else to turn to, he was trained by the mercenary leader Gambino at the age of six and went into his first battle at age nine where he made his first kill. He later killed Gambino after all his abuse (emotional, physical, and sexual) went too far.

Guts would venture off as a freelance mercenary until he was recruited into the Band of the Hawk, where he got more comfortable, and relaxed with them. But then the clan's leader Griffith, summoned a group of demons killing all the clan members, raped his girlfriend Casca, and left Guts with an amputated arm and a gouged out eye. Guts would later swear revenge against Griffith and vowed to kill him.

Guts appeared in Season 5 of One Minute Melee, where he fought against Kirito from the Sword Art Online series and won.

Guts appeared in Season 2 of DBX, where he fought against Cloud Strife from the Final Fantasy series and lost.

Sprite used in DEATH BATTLE!, DBX and One Minute Melee 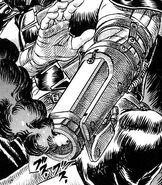 Crossbow
Add a photo to this gallery

Retrieved from "https://deathbattle.fandom.com/wiki/Guts?oldid=1056416"
Community content is available under CC-BY-SA unless otherwise noted.