Clinton "Clint" Barton, AKA Hawkeye, is a superhero from Marvel Comics. He appeared in the 56th episode of DEATH BATTLE!, Green Arrow VS Hawkeye, where he fought against Green Arrow from DC Comics.

Orphaned at a young age, Clint Barton ran away to the circus with his brother, Barney (who would go on to become one of his greatest foes). At the circus, he mastered the art of archery and left after discovering his mentors were criminals, becoming a solo carnival act.

During one of his performances, he witnessed Iron Man rescue some civilians and was inspired to become a costumed hero, using his archery skills to become the superhero known as Hawkeye. While he had a rough start and even collaborated with the then-villainous Black Widow to bring down Tony Stark, he eventually joined the Avengers and became one of its most valuable members.

Hawkeye appeared in Season 2 of One Minute Melee, where he fought his DEATH BATTLE! opponent Green Arrow and lost.

Hawkeye also briefly appeared in the Season 3 April Fools episode, Goku vs Sonic?, in which he and the Avengers are defeated by Goku handily. 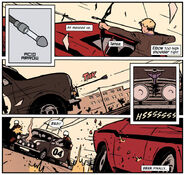 Acid Arrow
Add a photo to this gallery

Retrieved from "https://deathbattle.fandom.com/wiki/Hawkeye?oldid=1077177"
Community content is available under CC-BY-SA unless otherwise noted.