Hiei is one of the main protagonists of the Yu Yu Hakusho series. He appeared in the 115th episode of DEATH BATTLE!, Sasuke VS Hiei, where he fought against Sasuke Uchiha from the Naruto series.

Hiei is known as "Imiko" ("cursed child") because he is a male fire demon born to a "kōrime" ("ice maiden"), an all-female race. He was born male because his mother "interacted" with a male fire demon outside her isolationist Koorime community, which led to him being cast out as an infant and thrown over the mountain in which he was born. After surviving his fall down to the surface of Makai, he was found and raised by a gang of bandits, but it didn't last long. After realizing the value of the Tear Stone shed by his mother at his birth, he wore the Stone in full view of everyone, hoping to attract enemies to kill. At the young age of five, prior to his acquisition of the Jagan Eye, Hiei achieved A-Class yo-kai status (according to Mukuro). As he grew older, he killed mostly for fun, causing those that survived to greatly fear and reject him. After he was rejected, he continued to wear his stone in full view, yet gathered an attachment to it, as it gave him a sense of calmness and kinship. Nonetheless, he lost it when he fought a demon, and he vowed to thenceforth search for it.

Hiei appeared in Season 1 of DBX, where he fought against his DEATH BATTLE! opponent Sasuke Uchiha over a Hello Kitty doll, with both ending up dying in a spiked pit.

Hiei appeared in Season 5 of One Minute Melee, where he fought against Killua Zoldyck from the Hunter x Hunter series and won.

Sprite used in DBX, One Minute Melee and DEATH BATTLE! 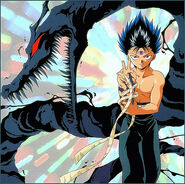 Dragon of the Darkness Flame 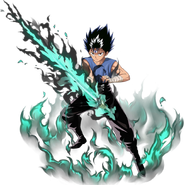 Sword of the Darkness Flame

Fist of the Mortal Flame 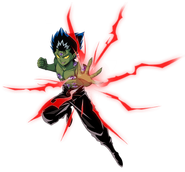 Black Dragon Wave
Add a photo to this gallery

Retrieved from "https://deathbattle.fandom.com/wiki/Hiei?oldid=1048620"
Community content is available under CC-BY-SA unless otherwise noted.