Anthony "Tony" Stark, AKA Iron Man, is a superhero from Marvel Comics. He appeared in the 46th episode of DEATH BATTLE!, Iron Man VS Lex Luthor, where he fought against Lex Luthor from DC Comics.

Tony Stark is the adoptive son of Howard and Maria Stark. He is a master prodigy, building his first engine at age 6, and getting his masters degree at MIT at age 15. When his parents died from a car crash, he inherited Stark Industries, and used the profits from the weapons manufacturing and trading for his own excursions.

However, everything changed in Afghanistan when a shrapnel bomb critically injured Tony in his heart, and was captured by a group of terrorists who wanted him to build more weapons for them. Instead, Tony created an Arc Reactor to keep the shrapnel in his heart from going deeper in, and constructed a suit made of Iron to make his escape.

Once back in America, Tony shut down the weapon manufacturing wing, and decided to save the world as best as he can with a new suit, dubbing him self as the Invincible Iron Man.

Throughout his many battles, he became one of the founding members of The Avengers, and has created more suits for any type of battle he might come across.

During Deadpool VS Pinkie Pie, a poster of the comic cover of "The Invincible Iron Man #126" featuring Iron Man can be seen in the background on the set of DEATH BATTLE! Cast during Deadpool's invasion of the show.

Tony Stark appears on a photo in the background of Winter Soldier VS Red Hood.

Iron Man appeared in the April Fools episode of One Minute Melee, Goku vs Sonic?, where he and the other Avengers try to stop Goku's rampage, only for he and Hawkeye to be easily taken out by Goku's ki blasts.

Iron Man appeared in the Season 2 Premiere of DBX, where he fought against Mega Man X from the series of the same name and lost.

He reappeared in the Season 4 Finale, where he fought against Batman from DC Comics and won. 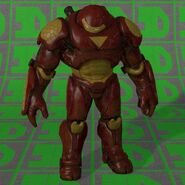 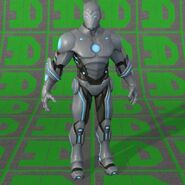 Sprite used for One Minute Melee and DBX

Proton Cannon
Add a photo to this gallery

Retrieved from "https://deathbattle.fandom.com/wiki/Iron_Man?oldid=1082039"
Community content is available under CC-BY-SA unless otherwise noted.