Isabella "Ivy" Valentine is a protagonist from the Soul Calibur series. She appeared in the 29th episode of DEATH BATTLE!, Ivy VS Orchid, where she fought against Black Orchid from the Killer Instinct series.

Ivy was raised by a London family named the Valentines. Ivy's father became obsessed with learning the secrets of the cursed blade Soul Edge and worked himself to death. Ivy discovered from her mother that they weren't her biological parents, as her father was the cursed pirate Cervantes who formerly wielded Soul Edge. Ivy became an alchemist determined to destroy the blade that ruined her family. 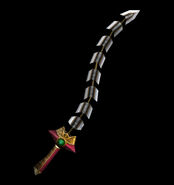 Grand Alchemy
Add a photo to this gallery

Retrieved from "https://deathbattle.fandom.com/wiki/Ivy_Valentine?oldid=1010840"
Community content is available under CC-BY-SA unless otherwise noted.