Jacob "Jake" Luke Long is a young Dragon who appears as a half-Chinese American teen who lives in New York City and serves as its Magical Protector.

Jake lives with his parents, Jonathan and Susan, and his younger sister, Haley Long in New York City. He is a descendant of a family of magical dragons. His two best friends are the feisty Trixie Carter and the seemingly dim-witted Arthur "Spud" Spudinski. Before his thirteenth birthday, Jake started getting glimpses of his dragon heritage. On his thirteenth birthday, his magical abilities fully emerged, and with help from his grandfather, and his dog Fu Dog he was set to protect an underground magical community existing within his city and throughout the world. 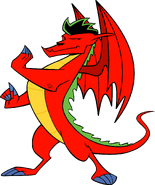 Eye of The Dragon

Ear of the Dragon

Doppelgänger Technique
Add a photo to this gallery

Retrieved from "https://deathbattle.fandom.com/wiki/Jake_Long?oldid=1079631"
Community content is available under CC-BY-SA unless otherwise noted.