Jin Kazama is the main protagonist of the Tekken series. He appeared in the 95th episode of DEATH BATTLE!, Ryu VS Jin, where he fought against Ryu from the Street Fighter series.

The son of Kazuya Mishima and Jun Kazama, Jin lived a peaceful life until his 15th birthday, where Ogre attacked his mother. Believing her to be dead, Jin swore revenge, went to his grandfather Heihachi and began training for the next time he met Ogre.

While Jin defeated Ogre at the Third King of Iron Fist Tournament, Heihachi betrayed him and was gunned down. However, his Devil Gene awakened, and he was able to escape to Australia from him. Angered by it, Jin swore to take down the Mishima family, eventually becoming the head of the Mishima Zaibatsu Corporation after winning the Fifth King of Iron Fist Tournament.

Jin appeared in Season 2 of One Minute Melee, where he fought his DEATH BATTLE! opponent Ryu, with the match ending in a tie. 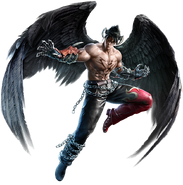 Retrieved from "https://deathbattle.fandom.com/wiki/Jin_Kazama?oldid=1074155"
Community content is available under CC-BY-SA unless otherwise noted.